Thank you to Crown Publishing for giving me this book in exchange for an honest review. I thank my lucky stars I got the opportunity to read this story.

Some books deserve a spot amongst the stars.

This book is one of them.

“Star Crossed” by Minnie Darke is one of those books that surprises you, makes you break out into a goofy grin and allows you to ponder on questions related to destiny. On the surface, this book is about a woman who plays astrologer by changing the horoscope of the person she loves in an attempt to get him to see her. At its core, this book is about fate, the choices we make and how ultimately everything around us is happening for a reason.

I’m a Taurus but I don’t believe in horoscopes. I always smile politely when people tell me how surprising it is that I’m a Taurus since my personality does not match this sign. The only thing I know from Astrology is that Mercury tends to be in retrograde quite often or maybe not often enough. Is that a bad thing? Feel free to educate me folks!

I truly enjoyed this novel as it did not push the reader to believe in astrology, rather it showed us how life will unfold the way it is meant to no matter how hard you try to control the outcome.

This book can be described in many ways:
A love story
A comedy
Exploring friendship
Following ones passion
Belief in Astrology
Fate vs. free will
Tons of Shakespeare references

It is all these things sprinkled with stardust. 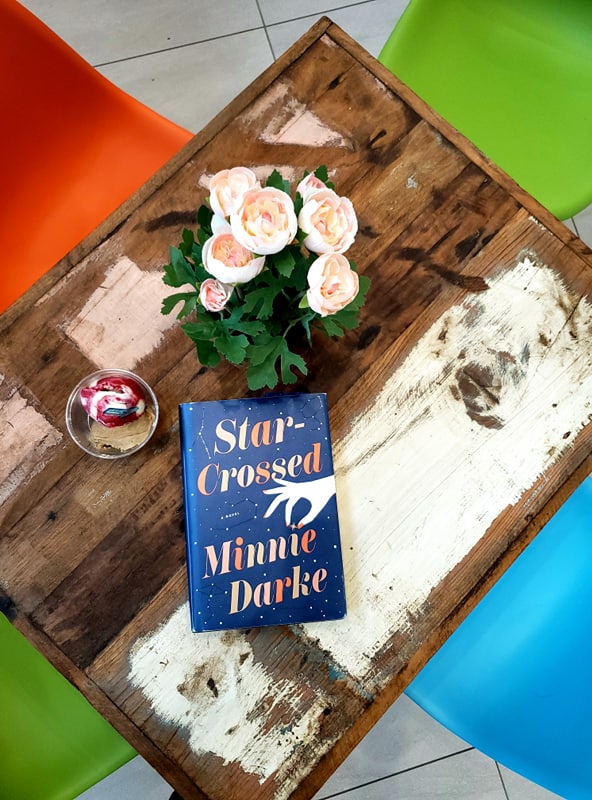 Justine is an aspiring journalist who bumps into Nick, her childhood sweetheart. When she keeps crossing paths with him, she wonders if this is just a coincidence or if it has a bigger meaning. Nick believes in Astrology and takes the advice of an Astrologer who writes for a magazine. The same magazine, as it turns out Justine works for. So what does Justine do knowing that she already missed out on being with Nick years ago? She decides to take fate into her own hands. Justine changes Nick’s horoscope readings in an attempt to guide him back to her. However, Justine fails to take into account how her altered readings will affect not only Nick’s future, but also the other readers out there who look to the stars for guidance.

“Did it necessarily follow that if you set your course by a false guide, you would end up at the wrong destination? Or, did fate have complicated ways of making sure that you ended up where you were supposed to be, anyway?” – Minnie Darke

Justine (Sagittarius/nonbeliever) and Nick (Aquarius/believer) are a hilarious duo. What made me laugh was how Justine firmly believed that horoscopes were hogwash but then attempted to play astrologer for Aquarians. It was both funny and nerve wrecking to read Justine sneak around her office to revamp the horoscope. Their friendship was endearing but there were times I wanted to be their mother and clunk their heads together to knock some sense into them. You realize early on how easy things would be if they were just honest about what they were feeling, but Justine was too scared and Nick was too confused and focused on advice from the horoscope.

While I could not relate to Nick’s firm belief in Astrology, I could relate to the struggle of following his passion and looking for signs telling him what step to take. He came across as a person who did not trust his own ability to make decisions. You could also feel Justine’s agony as she watches Nick drift further away from her and his talent. She came across as a person who is impulsive but so deeply in love that she could not see the wrong she was doing.

What I loved about this book is that it follows not only Nick and Justine, but also others in their orbit. Justine’s readings not only affected Nick but many other readers who find themselves in situations where they look to the stars for signs as to what to do next. The book jumps to these other characters and how collectively they either cross paths or play some kind of part in setting off a chain of events. They all get an amusing bio along with their sign, occupation and hobbies. It’s such a fun way to be introduced to these other characters.

All this makes you think about how things happen the way they do and how sometimes it is the smallest detail that sets off a sequence of events. I like how we get to explore the lives of others and how we get to connect the dots to see how they all fit into the story. Even though there are many secondary characters that are introduced, I never found it confusing. I would go as far as to say those parts were the most enjoyable. There is nothing I love more than starting small and putting together the big picture.

I was all starry eyed as I came to the end of this story. There is no doubt that I started this book knowing things will definitely be going wrong for home girl Justine. I was anticipating disaster but I still enjoyed the way it all unraveled. Minnie Darke is such a gifted writer as she makes the characters come alive on the pages through their funny bios and antics. I look forward to reading more from this author.

Shazia (Taurus): Reader of books, writer of stories and nurse of babies.